A florist shop is a retail establishment that sells cut flowers and ornamental plants. The floral trade involves activities such as flower care, flower arranging, floral design, merchandising, and often flower delivery. Florist shops are an ever popular industry. As such, we want to provide you with snapshots of the current industry overview, trends and challenges as well as provide some research resources for those interested in the florist shop business. 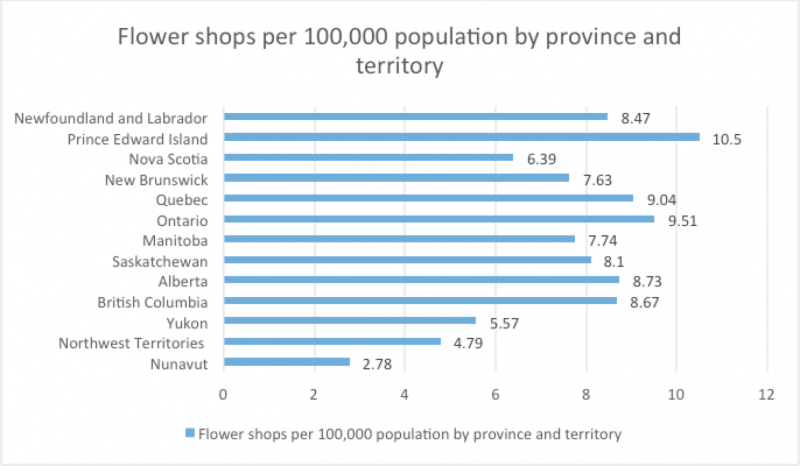 Number of Miscellaneous Retail Stores and Florists by Province and Territory

According to 2016 Canadian Industry Statistics for the florist industry, the average revenue of incorporated businesses with a revenue range of $30,000 to $5,000,000 was $273.4 thousands of dollars; and 72.5% of businesses were profitable.

Based on the preceding section regarding Canadian data above, this next section will list the statistics that are relevant to British Columbia.

According to a Florists-Canadian Market Research Report by IBIS World in 2017, the industry revenue has declined over the last five years due to external competition from retailers that are not included in the florist industry, such as e-commerce stores and supermarkets. It is suggested that consumers prefer the convenience and the lower prices that these alternative retailers have to offer. This report also suggests that “Improving economic conditions will encourage consumers to purchase more discretionary items" (IBIS World, 2017).

The most important success factors for the Florist Industry identified in the IBIS World report include:

Below are some resources to help you get started on your business research.

OFA – An Association of Floriculture Professionals

If you would like to access more resources, the Florist Shop Guide is designed to help prospective and existing wedding business owners gather information for their secondary market research. The guide is broken down into four main sections that cover how to start your research, industry information, competitive information and customer information. Depending on your needs you can spend as much or as little time as necessary in each section.

If you find that you need more guidance before starting your secondary research, check out our Business Research Basics, it will help you focus on what types of information you will need to gather and why it is important.